As I left Laos, everyone was gearing up for the Lao New Year, which is celebrated from April 13th through the 15th and coincides with the New Year’s festivities across many Southeast Asian countries that also follow the same astrological calendar.  I knew that it was a water celebration because everyone was selling water guns, but I didn’t really know the extent of the festivities until I arrived on the eve of what is known as the Songkran Festival in Chiang Rai, Thailand. That night, I checked into my guesthouse and then immediately went out in search of dinner and to explore the town.  My guesthouse was on a street with several other guesthouses, bars and restaurants, so there were lots of people in the streets and some of them seemed to already be testing their water guns to ensure they would be ready for the following day. I got a few spritzes of water as I passed through their territory outside of the bar, mainly because I had walked through the line of fire. Other than that, I made it back to my guesthouse unscathed. The next morning, as I ventured out in search of a good breakfast spot or coffee house, I had completely forgotten that it was officially the start of the Thai New Year celebrations. It wasn’t until I passed by several closed restaurants and shops and observed their posted signs, “Closed for New Year. Returning on April 21st”, that I remembered.  Regardless, I managed to find one delicious breakfast spot that was still open and enjoyed a lovely, quiet morning of reading, writing, and researching.  After breakfast, I decided to drop my laptop back at my guesthouse and then take myself on a tour of the town.  All I took with me was a small satchel carrying my camera, some money, and my room key.

The line of assailants armed with their water.

It was only thirty minutes later, but as I walked back down my street, it was lined with people. It was as if there was some secret signal that had been given and the games began. I watched as people ran hoses out to the curb and filled large trashcans or barrels full of water, then set up chairs, and even filled coolers full of ice. As I kept walking, one of the kids shot me in the back with his water gun. It caught me off guard and as I spun around to see who it was, I saw another kid running toward me with a pale of water. He threw. I dodged. He missed. I thought, “How exactly does this work? Are there just massive water battles in the streets, whether you’re willing or not… tourists alike”? The answer is YES. That’s exactly what happens. I managed to make it down the rest of the

street with only a few sprays from water guns and had to tuck my satchel with my camera in it under my arm to try to protect it. I was pleading silently with the universe… “please don’t let my camera be destroyed”. I thought about turning around and taking it back to the guesthouse but I didn’t know if I would make it down my street again and when I rounded the corner to the main street, a parade had started, so I wanted to be able to take pictures. 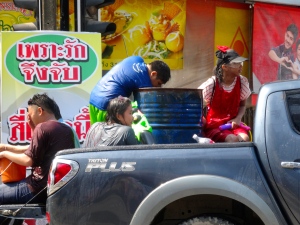 Pick-up truck carrying a bed of people and their barrel of water.

Thankfully, most of the people on the main street seemed to be enthralled and distracted by the parade so they were paying little attention to me as I walked behind them. They were more interested in dumping water on people in the street. There were pick-up trucks driving around with giant barrels of water in the back of them along with 3 or 4 people all scooping water out of the barrel and dumping it on anyone that they passed. The people on the sidewalk threw it right back at them in the truck. It didn’t matter if someone was on a bicycle or a motorcycle, they got doused while riding. Parade participant? Who cares… drenched with water.

Motorcycle water battle. Notice that the third person on the back of that motorcycle has a water gun.

Songkran, from the Sanskrit work samkranti literally translated is “astrological passage” and the pouring of water is meant as a symbol of washing away all of the bad. At this time of year, everyone cleans their house and the small Buddha statues that sit in front of them and the water that they use to do this is sometimes filled with fragrant herbs or flowers. The elderly men and women that I observed honoring this tradition did so reverently and respectfully by sprinkling some of their fragrant

water on my hands, a far contrast from the battles that I was witnessing on the streets from most of the younger generations. I had also read that during this week of the year, traffic accidents nearly double due to drunk driving. Although the article didn’t specify, I wouldn’t be surprised if some of those accidents happened because someone got a pale of water in the face as they rode their motorcycle. It was the only week since I’ve been in Southeast Asia when I’ve seen people regularly wearing helmets while riding their motorcycles. I walked a bit of the parade route and then when it was becoming more and more difficult to avoid a dousing of water, I ducked into a tea shop, made a purchase, and asked for a plastic bag to tie around my little purse in the hopes of keeping my camera dry. As I

Time to battle back.

walked out of the shop, I got no more than a half block before a very innocent looking, sweet teenager dumped a pale of water over me. I didn’t even see it coming. You know what I always say, when all else fails, do as the locals do… that was the end of it. I was already drenched so anytime anyone else came at me with a pale of water, I rushed in and attempted to redirect it back at him or her. I spent the rest of the afternoon on the parade route witnessing mayhem. I was told that this was the same as the festivities happening in Laos, which is ironic, since I had just spent the last month researching and spouting about water conservation. I eventually went home to change my dripping wet clothes and relax for a bit. Later that night, I went out for dinner and the festivities were still in full swing. I barely made it out the driveway of my guesthouse before someone was throwing water at me. So here’s how the Songkran Festival progressed for me: The Eve of Songkran: Huh, everyone’s really gearing up. Look at those water guns. I wonder how this works. Day 1: Oh, wow, this is crazy, but seems really fun… I’m just going to join in. Everyone’s having such a good time. Day 2: Huh, I really wish some more shops and restaurants were open. There’s not much to do other than the water battles. I don’t really feel comfortable trying to rent a moped and drive in this madness and I can’t even find a tour to join. How long do these water battles go on? And am I ever going to be able to sit down and enjoy a meal in dry underwear? This is getting a little annoying. Day 3 – Morning: I’m hiring a driver, not an open caged tuk-tuk… a driver, with a vehicle who can drive me around to a few of the sites and then take me with my bags to the bus station. I’m going to Chiang Mai. Day 3 – Afternoon: Bus ride to Chiang Mai (4 hours) – these people are so crazy. They’re throwing water at the bus windows… what’s the point? Day 3 – Evening: Arriving in Chiang Mai. There are almost three times as many people throwing water here, great.  I guess I’ll have to pull out my rain cover for my pack. Oh, yeah, of course the seats of the tuk-tuk are wet. Did that A-hole really just shoot water into my tuk-tuk and get my entire backpack wet? Oh yeah, figures, he’s not even Thai. He’s American. I guess I’m still going to get wet tonight when I go grab dinner. This tradition is dumb. Why do they need to celebrate for three days anyway? It’s officially only the new year on the first day. The morning after Songkran, shops were still closed, but order was restored and my bad attitude dried up with the warmth of the sun. Unfortunately, I think that bad attitude reared its ugly head because I was often on the defensive. If I ever come to Southeast Asia again during New Year, which I have to say is unlikely, I’ll be armed with my own damn water gun. Revelling, not so much.  Grateful for the passing of the New Year, definitely.