Each time that I venture back to the States after being on the road for an extended period, I arrive with a bit of apprehension, a twinge of angst about what to do next, and a bucket load of uncertainty. To say that I am a little more comfortable living as a nomad after what eventually became two years of travel instead of my originally intended one year would be the understatement of the year. I am also frequented with two questions as I meet people or talk to friends and family, “Where is home? And what’s next?”, neither of which I can easily answer. Has this ever happened to you? Someone asks a question and as you open your mouth to respond, you realize you have no idea what to say. The questions seem so simple yet I find myself wishing that I could just “Google” them. The screen would take me to my pre-written bio on Wikipedia so that I would know what the next step in my life is supposed to be – a map of sorts. And then I laugh heartily at myself because I know that I threw all of the maps out long ago.

As you may have noticed from the absence of posts, the road certainly has been long and uncertain, but it’s definitely had its benefits as well. I left Manila on June 2nd, flew against time, just like Superman as he spun the earth against time, and landed in Los Angeles two hours earlier than when I left Manila. Such a cool trick! After a very quick stopover, I went to Washington D.C. for a wedding, Pennsylvania to visit family, South Carolina to visit more family, reclaimed the car I had left with my parents and started driving back to Los Angeles to return to life as I knew it two years ago. It was right about the time that I made it to Houston, Texas (almost half way across the country), that I was so, so grateful that I took the long road. I had been experiencing some crazy reverse culture shock as I visited cities and towns that were so drastically different from what I left in South East Asia and that feeling of “I’m home” didn’t wash over me like past trips. As I drove into Houston and thought about settling back into routine in Los Angeles, I realized that I had reached the “stage of non-regression”. I had been studying Buddhism as I traveled through South East Asia and this term or phrase is one that I only learned recently but so aptly explains my sentiment. In Waking the Buddha by Clark Strand, he explains that in Nichiren Buddhism, the stage of non-regression is the point in one’s spiritual development where it becomes impossible to turn back and return to the world one knew before. This is exactly the experience that I was having. How could I possibly go back to the same old routine, schedule, and work after the multitude of experiences that had propelled me forward, made me feel more alive than ever, and altered my perspective over the past two years?

I remember very clearly sitting in my cousin’s house in Houston on Friday, July 10th, as she walked through the door carrying a bottle of Champaign. She had just received a promotion at work and had left a little early to celebrate. She looked at me and said, “Is everything ok? You look a little pale.” I explained that I had just declined the job offer that I had received in Los Angeles… the one that had set a whole chain of events in motion, like reclaiming my car, getting auto insurance, driving across the country, and apartment searching. My cousin asked, “so, what are you going to do now?”, which ironically is the cousin of “what’s next?” one of those tricky little questions that I can rarely answer. At that time, I didn’t quite comprehend the magnitude of the decision that I had just made but I shook it off and sipped a glass of Champaign. Celebration was in order. 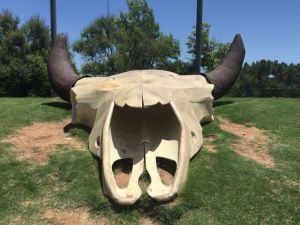 That weekend of reconnecting, reminiscing, and pondering life’s big questions with my cousins and family in Houston was a turning point for me along the long road. I couldn’t even fathom what would come next, but I could tell that something was shifting inside me, so I continued driving to figure it out. I went through Austin, Texas to visit a college friend, and then continued on through the rest of the dry, dusty, barren landscape of Texas into New Mexico. I absolutely love road trips and as I drove through

Billy the Kid Museum – visited coincidentally on the anniversary of Billy the Kid’s death – July 14th.

the intense heat of the South West, my innate senses of curiosity and exploration bubbled to the surface. I revelled in the journey, stopped thinking about the future and paid acute attention to everything that was around me. I stopped at silly places, anything that seemed the least bit interesting. There was the visitor center in Abilene, Texas that had a giant buffalo skull on display, the Billy the Kid museum, The Petrified National Forrest, The Painted Desert, a motel that had tee-pees as rooms, The Grand Canyon, Navajo Country, Zion National Park, and Las Vegas. As I visited some of the most popular national parks in the US, I realized that mostly foreign tourists who were

One angle of the Grand Canyon. Breathtaking!

doing the same surrounded me. It was quite the juxtaposition for me. I expect to be surrounded by different cultures and languages when I’m in another country, but it caught me off guard here in my home country. Regardless, I love meeting new people this way. Explaining to them that the cute, little furry creature that they’re photographing is a squirrel, not a chipmunk. I like learning what they think of the US. I like hearing their stories. The ability to study anthropology from the inside of each country and share those findings with the world resonates with me.

So now, I’m back in Los Angeles, but still living as a nomad. I’ve visited friends, slept on a few couches, done some housesitting, and am now subletting for a short time. At the moment, the long road is giving me some room to breath, think, dream, develop new goals, research, learn, create, and organize my new lifestyle. I relocated to Los Angeles 15 years ago for a fresh start. Symbolically, I’ve come back to do the same thing all over, but this time I won’t be staying and I’m not just going to stumble onto the next thing that brings me a paycheck. This time I’m designing a life that I’ll love. I no longer want to take the road congested with cars, exhaust fumes, noise pollution, and impatient people. The scenic route is far prettier with it’s vistas and views, open highway, wind in my hair and happy-go-lucky types willing to engage in conversation over life’s simple pleasures.

And back to those two challenging little questions… where is home and what’s next? Well, you know the saying, “home is where the heart is”? I wear my heart on my sleeve and I take it with me everywhere I go, so home is where I am. It already has a permanent address . And since many of you have been asking me for two years now how I’ve managed to travel for so long, what’s next is me continuing to travel for as long and as far as I can, sharing stories from the road, and teaching anyone who has the desire for long term travel how to plan it, design the trip, and ensure that the trip enhances their career path and life story.  Let’s call it career boosting.  But more importantly, teaching them, and you, my dear readers, that NOW is the time… to take action, to change your story, and to live a life that you love.

Keep an eye out for a little different look and feel on my website and sign up to follow me if you don’t want to miss out on all of the travel secrets that I’ve learned over the past two years living as a global nomad.

Revelling in gratitude along the journey!

1 thought on “The Long Road and what’s next”