It’s been over three months since I last updated you all, and for that, let me apologize.  As most of you know, I’ve jumped back into Corporate life here in Johannesburg, and despite my best efforts, I seem to once again have lost my balance.  My creative writing has been replaced with writing recruitment policy documents.  Exploration equates to digging through past process for the sake of evaluation.  And travel is reserved for day trips to various office locations.  I’ve done less sightseeing than I would have liked, but as I’ve said many times, my adventure isn’t just about seeing beautiful sites.  It’s about experiencing new cultures, meeting new people, and developing relationships that make this gigantic world feel much, much smaller.  And to this end, my adventure to date, work included, has been a complete success.

Now, a lot has happened in three months, and it would be an exceptionally long post if I were to start from the beginning, so I’m going to summarize and just give you an update on the past month, which has been a whirlwind.  I’ve been consulting with a global architecture, engineering, and construction company and the assignment was to examine current recruitment processes, determine how to implement existing corporate structures across the region of Africa, hire a team and my replacement, and then outline policy that would allow the team to integrate and grow.  Mission mostly accomplished.  I’ve learned that everything moves a little slower in Africa… everything from people to infrastructure to service delivery, so it would probably help if I had a few more weeks or even months, but I think we’ve been able to build a strong foundation.  Unfortunately, after working many more hours than I told myself I would work, and playing just as hard on the weekends, I came down with what I thought was a case of the flu.

When I woke up on Monday morning about three weeks ago, I knew it was a little more serious than the average cold because my glands were swollen and I could barely drag myself out of bed.  As I’ve already had to do twice on this journey, I mustered all my energy to research local healthcare options, reached out to friends for advice, and then took myself to the doctor.  Antibiotics in hand, I left the doctor thinking I could go home and sleep the rest of that Monday and hopefully feel better enough to return to work on Tuesday.  However, on Tuesday morning, I woke instead with what looked like a tumor on the side of my neck.  I called the doctor back and when I told him that I was feeling worse, he insisted that I needed to give the antibiotics 48 hours to work.  So I reluctantly called in sick again for work and went back to bed.  During the next 24 hours, I was restless, had trouble sleeping and lay in a state of delirium, wondering what sort of African bug had taken hold of my body.  By Wednesday morning, not only had I barely been able to sleep, but I could no longer swallow, and my voice had turned into a scratchy whisper.  Off to the doctor I went.  My appointment was at 10:30am.  The doctor took one look at my throat and escalated his diagnosis to throat abscess and acute tonsillitis.  He said he needed to refer me to an ENT and immediately picked up the phone for the ENT on the second floor. He made it an urgent request, sent me upstairs where I promptly met said ENT.  The ENT said my throat was too swollen to see anything but given the fact that it was so enflamed and I couldn’t swallow anymore, he thought it best to admit me to the hospital for two nights.  While there, they would administer intravenous antibiotics until the swelling decreased and the doctor could do a needle aspiration of my throat to determine the extent of infection.  What the hell was happening?  By 3:30pm that same Wednesday, I had an IV in the back of my hand. 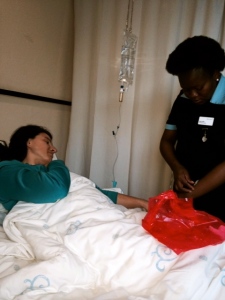 Getting my IV drugs at Sandton Mediclinic

Do you remember the last time that you’ve been so sick that you didn’t have the energy to do anything so all you could do was sit and count the seconds as they tick past?  My closest recollection was post knee surgery 2010, but at least then, I knew exactly what had happened.  I had never been more grateful for the relationships that I had developed in the weeks prior.  The well wishes from co-workers, the offers to bring me food, magazines, or anything else that I required, the friends who came to visit, and the man who sat by my bedside and sent pictures of me to my parents so that they wouldn’t worry after I had just called them for my emergency travel healthcare policy information.

I’m happy to report that after a needle aspiration of my throat, the doctor determined that I did not have an abscess, just a severe infection, so after another day of antibiotics, I was discharged with strict advice to rest and return in a month for a tonsillectomy.  I will say that I’ve settled in quite well here in Joburg, but there’s nothing that makes you miss friends, family, and home more than suddenly falling ill in a foreign country.  And while I’m also happy to report that medicine in this developing nation is on par with first world medicine, I would just feel more comfortable getting a tonsillectomy in the states.  So there you have it… I’m coming home.

Over the past two weeks of what has felt like a very long road to recovery, work has been more hectic than ever, thoughts and plans for leaving have turned bitter sweet, and I’ve realized that I’ve made some really fantastic friends here.  The kind of friends that will be there during the bad times, not just the good.  So, although I’m tired of South Africa’s winter and can’t wait to catch the end of a California summer… I find myself caught in the fray.

I’m a bit worn out by the long hours of work, but I’m sad to leave the team here.  I want to visit home, but suddenly feel like I’m abandoning a home that I’ve just started to build here.  And unlike the other friends I’ve met on the road, with whom I’ve spent a few days, this time I will be leaving friends with whom I’ve spent months getting to know… and I can’t really say when I’ll see them again.  My heart breaks a little every time I think about it and there’s a bit of a battle going on in my heart and my head… I’m not sure what side I’m on so I’ll just have to let it play out.

This, my friends, is the current state of my world and my mind.  I haven’t purchased the tickets yet, but I’m pretty sure that I will… And would then be arriving in Los Angeles some time next month.  I can’t wait to see you all!

Be grateful today for your health… it makes a world of difference.

7 thoughts on “Caught in the fray”