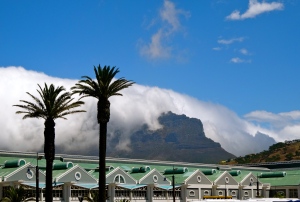 Cape Town, South Africa has been both a pleasant surprise and a tragic contradiction all at the same time. When I first arrived, it was easy to be lured to the most beautiful sites of the city.  Camps Bay Beach and Sea Point both have fun spots for sundowners.  The VA Waterfront is always buzzing with its shops and restaurants.  Long Street, Kloof Street, and Bree Street are undeniably enchanting with their artistic shops, creatively delicious cafes and the African music that echoes from storefront to restaurant.   There’s no way to avoid a glimpse of Table Mountain around every bend or the allure of the magical tablecloth that sits on top of it.  And the panoramic views of the city from Signal Hill are gorgeous.  All of this coupled with a friendly culture, a short drive to exotic animals, and rolling vineyards made me think, why would anyone live anywhere else? 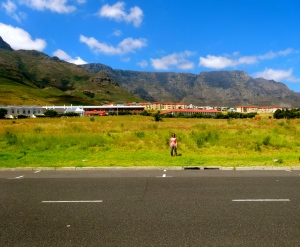 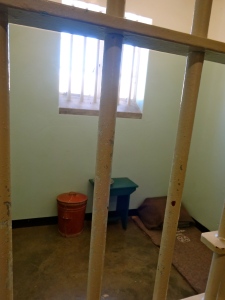 Then I went down the street and turned the corner to find a sprawling reminder of the recent political past, a still empty District Six, where an entire neighborhood was plowed to the ground.  The government is still trying to decide what to rebuild on the land and how to do it.  I realized that all of those displaced families now reside in “townships”, which are little more than shanty-towns with no electricity or running water on the outskirts of the city. I took a boat ride to Robben Island for a walk through the struggle of what political prisoners endured only 23 short years ago.  Then I visited wine country and realized that once I looked beyond the stunning mountains and sparkling sunsets, although apartheid has ended, there is still a significant gap between the races and there are barely any integrated neighborhoods.  When I shared half my lunch, gave my leftovers to the man on the bench, or gave a ride to the poor guy who lived so far out of town that he had to take multiple forms of public transportation to get home, I was painfully aware that not one of those folks was white.

Cape Town has so much to offer and yet so far to go to reach equality.  I consider myself a citizen of the world right now, and as such, find myself wanting to give back to a world that has so generously given to me, but it was hard to know where to start in Cape Town.  Every fiber of my being wanted to jump in and help, but I also recognized that most situations were infinitely more complex than what I was observing on the surface.  There is progress, movement, hope, and creativity and when I really stopped to absorb it all, I could feel the winds of change blowing.  There is still considerable contradiction running through the landscape but I think it is contradiction that is worth witnessing for the eye-opening perspective that it is sure to inject.

If you’ve been there, I’m curious to know what your experience was … please share!

2 thoughts on “A land of contradiction”